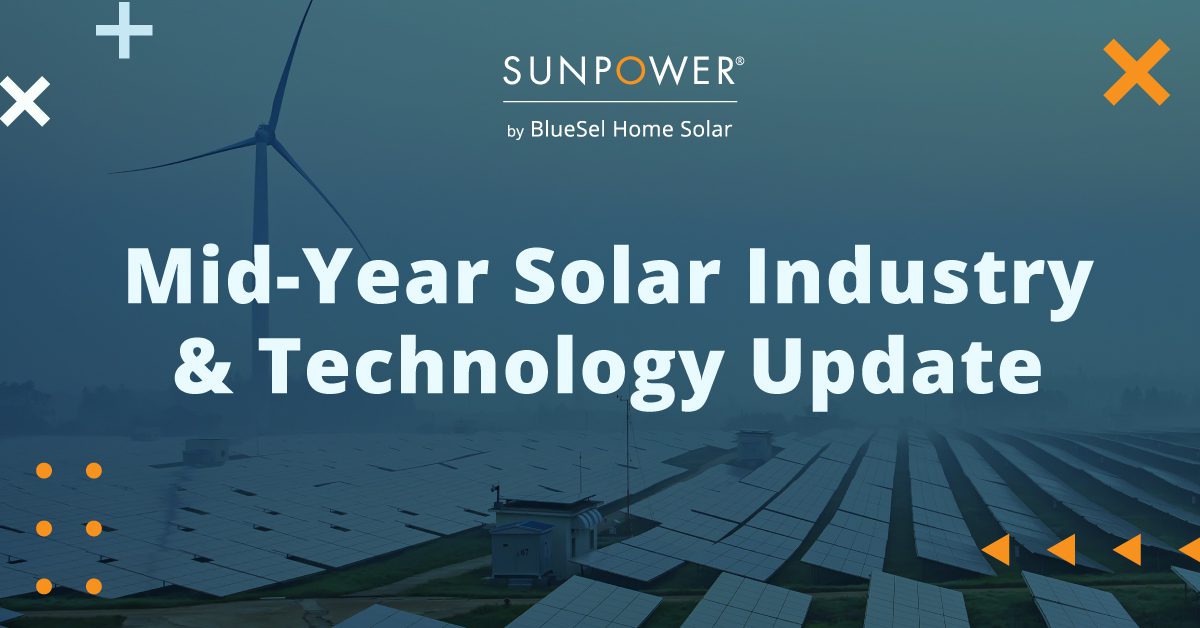 Here we are, a little over halfway through an eventful year that many consider to be a fresh start for not only our nation but the world as a whole.

2021 represents new beginnings and positive growth for industries across the globe, and this is especially true when it comes to the solar industry. While the COVID-19 pandemic may have slowed our industry’s growth for a while, it also set the stage for unprecedented advancements throughout the industry and solar-powered technologies and progress in renewable energy at economic and political levels.

In today’s blog, let’s examine how the solar industry has bounced back (so far) in 2021. We’ll explore solar in the news, the current costs of solar, and how solar power has affected communities across the nation.

The Cost of Solar Has Lowered

To start off, a quick staggering fact about the current solar industry. Would you believe that just 10 years ago, solar energy was the “most expensive option for building a new energy development?” Since then, the cost of solar has dropped dramatically, nearly 90%! This fact represents a continuous trend in the cost-effectiveness of solar energy.

The incentive to own residential solar systems in Massachusetts grew this past year with Governor Baker’s signing of “An Act Creating A Roadmap for the Next Generation of Climate Policy.” The act pushes forth even more benefits for solar owners in the state. This includes property tax benefits, the raising of net metering caps for both residential and commercial systems, and making Mass’s SMART program more financially accessible for residents.

Led by the Biden Administration, The American Jobs Plan is a massive spending package that proposes initiatives focused on strengthening the United States’s infrastructure through renewable means, including solar power. With the initial proposal back in March, the $2 trillion plan dedicates $580 billion to the research, development, manufacturing, and training, prioritizing green energy initiatives.

However, it is important to note that negotiations are still underway regarding the American Jobs Plan, and the initiatives initially set forth are in a constant state of flux. It remains to be seen how the plan will roll out, but the priority on renewable energy seems to show a viable direction for the overall plan.

The Continued Rise of Energy Storage

According to the Energy Storage Association, we can expect to see an energy storage surge throughout 2021 with an expectation of 3.6GW of battery storage installed throughout the rest of the year. In fact, according to Solar Power World, Woods Mackenzie predicts “that the sector will expand by six-times through 2025, largely attributed to the desire for resiliency.”

The International Technology Roadmap for Photovoltaic (ITRPV) also found that around 4% of global solar projects came bundled with solar battery storage systems in 2020 — a number that they expect to increase to 50% by 2030.

When keeping these numbers and predictions in mind, it’s safe to assume that solar battery storage is here to stay, becoming a substantial sector of the solar industry. With more and more battery storage options available for residential solar owners, households now have the opportunity to become even more energy independent.

Feel-Good Solar Powered Stories From Across The Nation

A true example of the transformative power of solar energy. The power provided by solar technology allowed a rural Arkansas school district to give school-wide raises to its teachers. According to a recent report by CBS News, the Batesville School District in Batesville, AK, with an average salary of around $45,000, turned an unused school field into a solar energy farm in 2017.

According to the report, the school district converted one of their nearby unused, large fields into a solar farm in 2017. Now, the Batesville School District has reaped the benefits of that decision, bringing about unprecedented economic growth within their school district budgets.

This heartwarming story indeed illustrates the economic power and impact of renewables and solar energy on a community — even small communities, such as Batesville, AK. Knowing that solar power helped provide educators with a much-deserved pay increase makes us incredibly proud to be a part of this industry.

Are you heading out to a barbeque today? Or are you sitting back and enjoying a cold brew this weekend? Well, that beer or seltzer that you’re enjoying may be the product of renewable energy generated by both wind and solar power. All domestic and seltzer brands under Anheuser-Busch are now 100% brewed with renewable energy.

The Anheuser-Busch Solar Farm is a massive, 2,000-acre solar energy facility, hosting almost 800,000 individual solar panels. In fact, the solar farm is so massive that if the panels were lined up “end to end, the panels would span from New York City to Orlando.”

According to the brewing giant, Anheuser-Busch has:

This accomplishment, announced just last month (June 2021), means that the brewing company has reached its 2025 Sustainability Goals 4 years early! A fact that further supports renewable energy’s continued rise and accessibility as a source of power within both residential communities AND commercial industries.

A Bright Future For The Solar Industry

These are just a few of the advancements and stories heard around the nation when it comes to solar power. With new initiatives and support, technologies, and research and development put forth daily, you can expect major achievements in renewable energy throughout the rest of 2021 and beyond.