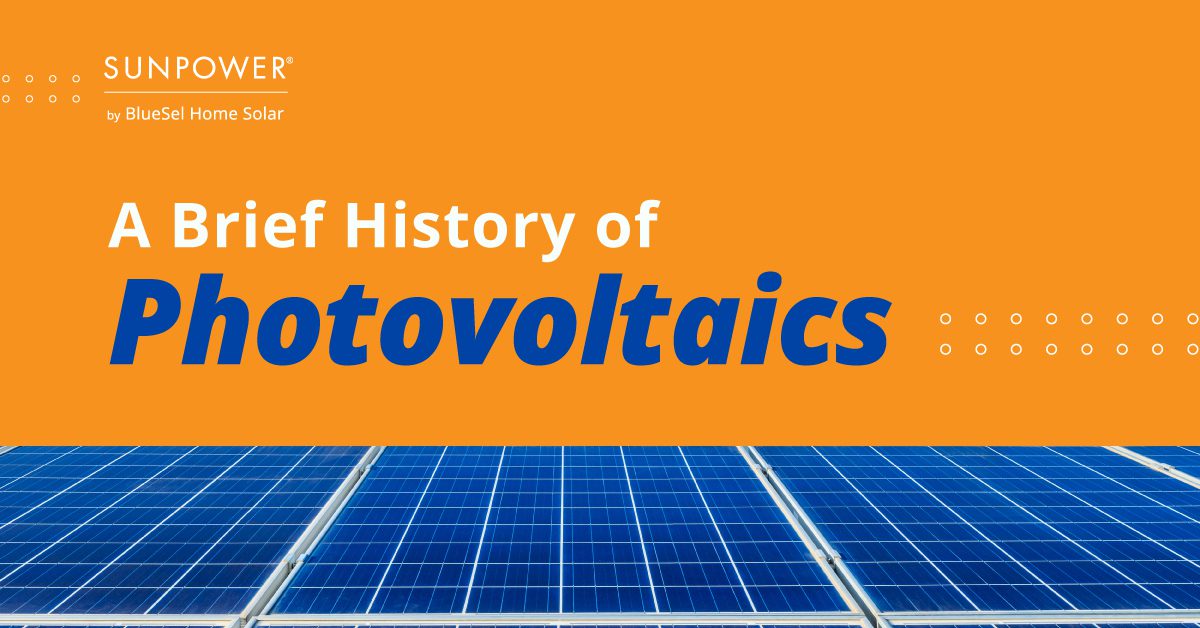 A Brief History of Photovoltaics

When it comes to solar power, especially residential solar systems, you’ll hear the term photovoltaic (or PV) often. While this term represents the heart of solar panels, what exactly does Photovoltaic mean? And, how does photovoltaic technology play a critical role in harnessing solar energy for homes across the world?

In today’s blog, let’s take a look at PV, the history behind photovoltaic technology, and how PV cells work together to create electricity for your home.

What Does Photovoltaic Mean?

Merriam-Webster defines photovoltaic as “of, relating to, or utilizing the generation of a voltage when radiant energy falls on the boundary between dissimilar substances (such as two different semiconductors).”

To simplify, the photovoltaic effect is the conversion of light into energy. This is performed at the atomic level. Technology, called PV cells, allow us to harness the photovoltaic effect, typically producing about 1 or 2 watts of power each. By combining many of these PV cells into one device, we can create a solar panel. Then, these panels come together to create solar energy systems, capturing and converting sunlight into usable electrical energy for your home.

When Were PV Cells Invented?

In 1839, a young physicist named Edmond Becquerel became the first person to observe the photovoltaic effect — the production of electricity via sunlight exposure. In 1883, Charles Fritts, an inventor from New York, created the first solar cell by, “coating selenium with a thin layer of gold.” From there, patents and devices that harness sunlight as an energy source can be traced back as early as 1888.

Believe it or not, the first conventional PV cells were created and used during the space race in the late 1950s and throughout the 60s. These solar cells were used to power satellites orbiting the Earth. On March 17, 1958, the Vanguard 1 satellite launched as the first satellite to use solar cell power. It is currently the oldest satellite still orbiting our planet.

Innovations in solar manufacturing led to the growth and development of PV cells throughout the 1970s. These manufacturing innovations opened PV cells up to better performance and build quality, drastically reducing the cost to produce the cells. According to the Florida Solar Energy Center, this allowed a “number of opportunities for powering remote terrestrial applications, including battery charging for navigational aids, signals, telecommunications equipment, and other critical, low-power needs.”

In response to the energy crises of the 70s, Congress passed the Solar Energy Research, Development and Demonstration Act of 1974, with the hopes of making solar “viable and affordable, [marketing] it to the public.” This resulted in people seeing solar energy as a suitable alternative source of electricity for their homes. In the 80s, solar energy also expanded to consumer electronics, such as calculators, watches, and other small devices.

Today, the results of photovoltaic technology advancements can be seen everywhere. As solar continues to prove itself a reliable, sustainable source of clean energy, PV cells are continuously innovated and improved to match demand. More and more homes across the region, the country, and the world are installing residential solar systems to help them retain more energy independence and to help the environment around us.

Advancements in solar cells, such as the Maxeon Technology offered by SunPower by Bluesel Home Solar, have created cells that achieve unmatched reliability and higher efficiency than traditional panels. Oh, and they’re tough as nails, able to withstand the toughest weather conditions, produce unprecedented amounts of clean, renewable solar energy, and they look pretty sharp while doing it. We have come pretty far since Becquerel first observed the photovoltaic effect, showing no signs of slowing down now.