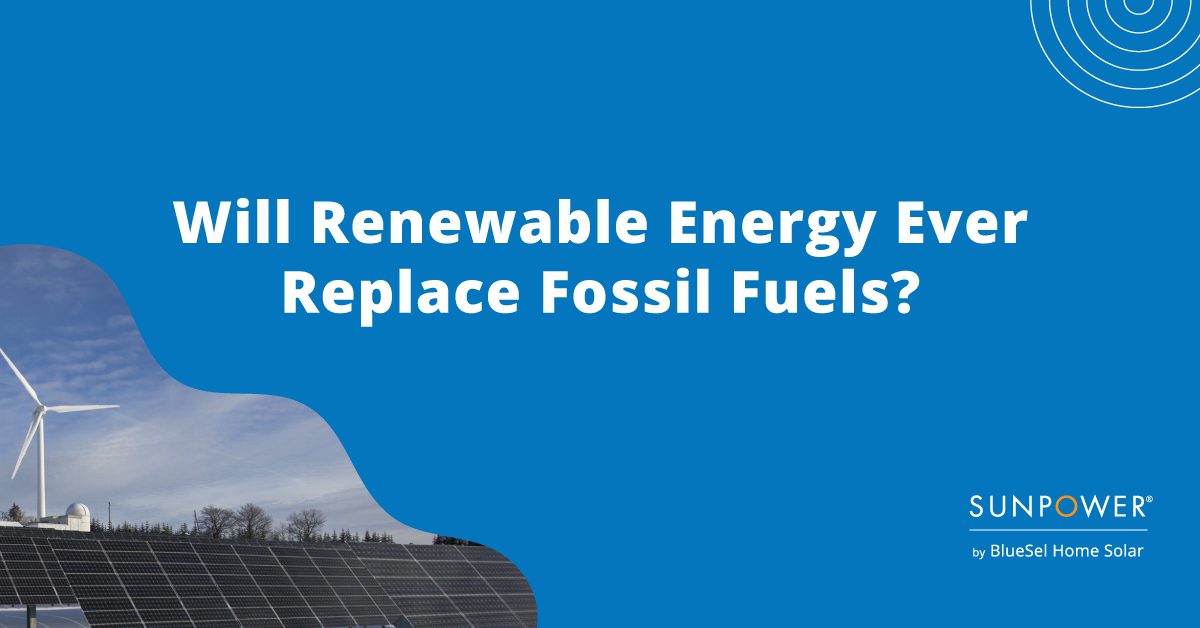 Will renewable energy ever replace the energy derived from fossil fuels? It’s one of the biggest questions posed by the public today. And, with the United States’s renewed interest in renewable, green energy sources, it’s a very relevant question to ask.

And, to be upfront, we cannot possibly give you a definitive answer to that question in a single blog. There are various political, stakeholder, societal, and economical factors and questions that need to fall into place and get answered before renewables can completely replace the fossil fuel industry. However, we can explore the factors that can eventually lead our society to a carbon-free, non-fossil fuel-reliant future and economy.

The National Renewable Energy Laboratory found that by generating 35% of electricity via wind and solar energy, CO2 emissions were reduced by 24-45% in the western United States. From this, we can gather that renewable energy isn’t only a viable alternative to fossil fuels, but it can also help displace fossil fuels and the CO2 emissions caused by their use.

And, while it can be tempting to say that renewable energy, such as solar power, only works in the correct conditions (ex. ample amounts of sunlight), there is enough energy collected during peak conditions to be managed within the grid.

According to the World Resources Institute, “In 2018, operators in California, the Southwest, and Texas used wind and solar for nearly 20% or more of their energy on an annual average basis, and in excess of 50-60% on an hourly basis. In Europe, several countries have managed even higher hourly penetrations of wind and solar, including Denmark (139%), Germany (89%) and Ireland (88%).”

The Viability of Battery Storage

At the beginning of 2020, the clean energy sector employed more than 3.3 million people in the United States and Europe. A majority of these employees held jobs within local small to medium-sized clean energy-based businesses (such as Bluesel). These workers are technicians, manufacturers, office staff, administration, and more. It’s important to remember that renewable energy is set to transform the energy industry, not replace it.

The cost of producing and utilizing renewable energy is falling rapidly as we continue to advance and innovate clean processes. According to BloombergNEF, “solar PV and onshore wind are now the cheapest sources of new-build generation for at least two-thirds of the global population.”

Not only are the costs of producing clean energy falling, but renewable power plants themselves are easier to build, minimize environmental impact, and last longer. Photovoltaic systems usually have the ability to operate smoothly for 25-40 years and take less than two years to build to completion, whereas gas-fired plants typically take up to four years to become operational.

A Greener Future For All

Will renewable energy eventually replace fossil fuels? It remains to be seen. However, we know that the variables have been set in place to see this monumental change. The only question left is whether or not we are all willing to make the change and create a greener, more sustainable future for the planet.