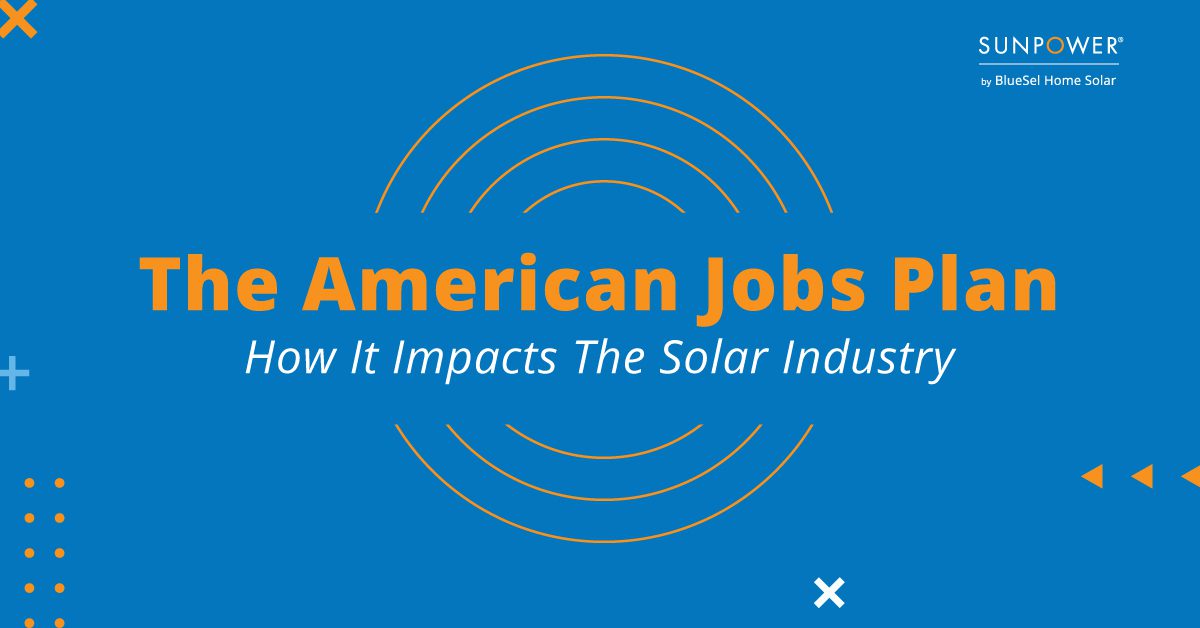 The American Jobs Plan: How It Impacts The Solar Industry

On March 31, 2021, the Biden Administration unveiled its “American Jobs Plan,” a massive spending package focused on the United State’s infrastructure, including significant investments into the nation’s electrical grid infrastructure and a focus on boosting renewable energy growth.

The $2 trillion package lists $100 billion focused on electrical infrastructure and $213 for affordable and environmentally sustainable housing. The plan also dedicates $580 billion to research and development, manufacturing, and training, prioritizing green energy initiatives, such as emission reduction, climate-focused research and innovation, and climate resilience with these industries.

It remains to be seen how much of the plan will actually make it through Congress and into real-world applications. In its current form, the plan represents a major shift in the way that our federal government focuses on and supports renewable energy, including solar power, among other progressive initiatives.

In today’s blog, let’s go over the proposed “American Jobs Plan,” and let’s take a look at how that plan possibly affects solar power in your home and community, the solar industry, and the green/renewable energy industry as a whole.

Getting Back In The (Clean) Energy Game

Did you know that while the United States is the wealthiest country globally, it has fallen far behind competing countries across the globe? Currently, America only ranks 13th in the world for overall infrastructure quality.

According to the White House’s Fact Sheet, “our electric grid is vulnerable to catastrophic outages” (as seen last February in Texas) and that “after decades of disinvestment, our roads, bridges, and water systems are crumbling.” The White House explains that it is essential to understand that our country is falling behind the rest of the world regarding research and development, manufacturing, and training, especially when it comes to innovative and sustainable practices.

According to Solar Power World, “The plan aims to create a more resilient grid, lower energy bills for middle-class Americans, improve air quality and public health outcomes, and create good jobs, with a choice to join a union, on the path to achieving 100% carbon-free electricity by 2035.” The plan also dedicates nearly $100 billion to harnessing solar and wind resources to improve resiliency within the grid.

A 10-Year Extension of the Investment Tax Credit

One of the key ways that the American Jobs Plan affects solar is the proposed 10-year extension of the Federal Investment Tax Credit (ITC) alongside the Production Tax Credit. While the ITC was granted an extension last year as a response to the COVID-19 pandemic, this plan extends the ITC for another 10 years, incentivizing solar investments for both residential and commercial properties. Although, at the moment, specific details regarding the credits degradation over time have not been disclosed.

The Federal Investment Tax Credit has made a tremendous impact when it comes to incentivizing both commercial and residential solar panel installations. Currently, the tax credit is defined as a “dollar-for-dollar reduction in the amount of income tax you would otherwise owe. For example, claiming a $1,000 federal tax credit reduces your federal income taxes due by $1,000.” Since the ITC’s implementation, the solar industry has seen 52% annual growth, proving that the credit should remain active as long as possible, especially when chasing the lofty goals of a green economy to combat climate change.

Including Energy Storage In The Investment Tax Credit

The 10-year extension of the Investment Tax Credit would also add flexibility when it comes to claiming energy storage systems. According to Energy Storage News, “presently the ITC can be applied for solar, as well as for storage systems if deployed simultaneously at new-build solar power plants.” The ITC in its current form does not include energy storage.

The successful economic implementation of energy storage could very well become a huge factor in creating a post-pandemic green and sustainable national economy. According to Jason Burwen, interim CEO of the US National Energy Storage Association, building up our country’s post-COVID infrastructure requires the nation to “deploy energy storage at an unprecedented scale. President Biden’s American Jobs Plan would put us on that path.”

Key Takeaways For The Future of Solar & The Solar Industry

We predicted in the past that the new administration’s promises of a greener tomorrow and the delay caused by the COVID-19 pandemic would signify huge leaps in technological and economic innovation, especially when it comes to the solar industry. Now, with the introduction of the American Jobs Plan, which seeks to merge economic infrastructure rebirth with policies to combat climate change, it would seem that we are starting down this “greener” path. How much can we expect this plan to affect the solar industry? If implemented as announced and promise, of course.

As with any industry, the solar industry provides jobs within any community or area that it touches. In 2019, the National Solar Jobs Census found that the solar industry currently employed nearly 250,000 workers. With 56% of those workers working within the residential solar market and that of the 250,000 workers, 162,126 worked in solar panel installation and project development, followed by 34,423 in solar manufacturing.

It’s safe to say that solar has made a huge impact on the job market and continues to do so within communities around the world, the country, and within your own community. From installation technicians to sales representatives to manufacturers and inventors, there’s room for all fields of study in the world of solar.

As one of the wealthiest nations in the world, it should be expected that the United States becomes a trailblazer for green technology. There’s no reason why our country shouldn’t have the best performing and seamlessly integrated green and solar technology.

The American Jobs Plan, if passed, is set to provide critical funding for green technology research and development, helping to ensure that the United States stays on the cutting edge of sustainable technologies, such as wind and solar. With this funding, talented solar engineers can get to work creating the next generation of solar technology that may eventually make its way into your home.

Kelsey Misbrener of Solar Power World explains that “President Biden believes that the market-based shift toward clean energy presents enormous opportunities for the development of new markets and new industries.”

By building next-generation sustainable green industries within traditionally distressed or disadvantaged communities, our country can promote significant economic growth within these communities. As we’ve explored before, solar and green energy businesses or operations have incredibly positive impacts within communities they call home. And, while there are many economic benefits that come with these positive impacts, this can be most seen in local employment and training opportunities.

While many would point to this bill as a lofty aspiration, the potential benefits of such support for sustainable industries are tremendous. If promises are kept and fulfilled, this bill can start a new sustainably-powered age within our economy and our daily lives.